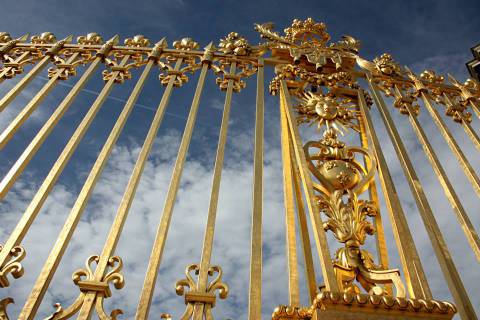 Come and spend a whole unforgettable day in Versailles where politics meet art and history!
We’ll first head in a VIP coach to Versailles and visit the main palace’s grands and small apartments, including the chapel, the Queen and the King’s bedrooms. More rooms, in the private apartments, behind the scene and usually closed to tourists, are available on request for a very private visit.
We’ll then wander into the gardens and discover the groves, home to the king’s magnificance, with water, sculptures and trimmed bushes.
After a lunch break in the domain’s most beautiful restaurant, we’ll go on with an electric car to take a view at the other castles, the Grand and Petit Trianon, the latter, home of Queen Marie Antoinette, giving way to the Queen’s estate, bucolic and charming domain where most of the visitors rarely wander.

Discover the secrets of the domain of Versailles !

The formidable palace of Louis the XIVth is emblematic of the “Grand siècle” (great century) where French culture and architecture spread throughout Europe. From 1682 to 1789, it will remain the center of France. The most famous architects, designers, gardeners and painters will master their art at the service of the glory of the king and country.
In 1682, while the hall of mirrors is still behind scaffolding, the king and his court settle in Versailles for good, implementing the sun king’s political desire: having the high aristocracy under leash, behind severe etiquette and privileges of serving or approaching the “greatest king in the world“.

Most of the rooms visited in the castle have been refurbished as they were in the seventeenth century, as most of the furniture was sold in auction during the French Revolution. We’ll visit the rooms of the Grands apartments, but also the more private ones (option), beautifully designed by the Eighteenth century’s Kings, Louis the XVth and Louis the XVIth.

After the castle, we’ll take a walk into the amazing gardens and especially the groves, designed by André Le Nôtre, Louis the XIVth gardener. They are part of the prestige project of the king and have aesthetic and politic objectives.  It includes hidden groves, where the court could gather around elegant fountains or decored with mythological scenes.

We’ll have a break for lunch in ancient seventeenth century stables converted into a refined restaurant. The rest of the day will be spent visiting the Trianons. First of all the Grand Trianon, built under Louis the XIV, as a shelter place to forget the courts etiquette and intrigues. The house was redesigned after the Revolution by Napoleon and subsequent Kings. Used after the First world war for debating peace treaties, part of it was reserved by General de Gaulle in the 1960’s for the French presidency, until today.

Short distance away lies the Petit Trianon, built for Louis the XVth and used for his mistresses. It is more well known for being the hideout of Marie Antoinette. During 15 years, until the French Revolution, the queen of France will spend happy times in this estate, surrounded by close friends amidst animals and farms, theatre, chapel and a few other pavilions typical of French classicism.

A VIP coach will then take us back to your hotel in Paris.