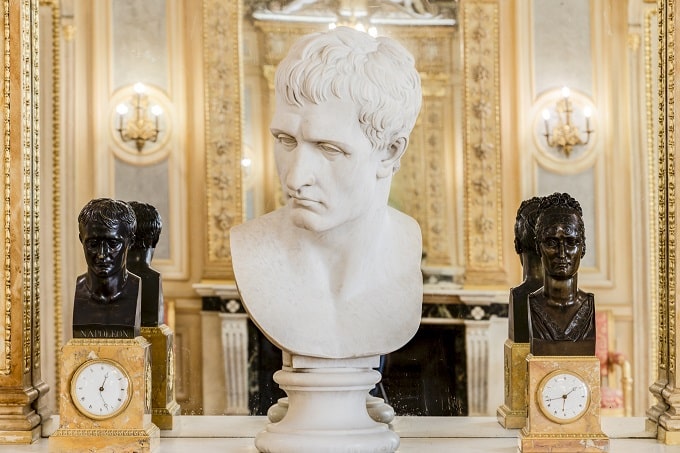 Visit this authentic palace hidden in the heart of Paris where a enthusiast has spent all his life gathering the biggest private collection of Napoleon’s objects in the world!
Access the beautiful and gilded rooms where portraits, sculptures and pieces of furniture are exposed at an arm’s reach in an apartment manner, without anyone around!
The end of the tour will see the secret cabinet of curiosities open, where the visitor can marvel at some unique pieces of the collection belonging to the Emperor Napoleon and his family.
Treat yourself: stroll the collection with a glass of premium champagne!

The Napoleon’s rooms experience will allow you to discover the biggest private collection from the Napoleonic era in the world, with direct access and no barriers!

Built in 1706, at the end of the reign of the Sun King, the Palace is sold a few years later to the noble family of Montmorency and became one of the most beautiful mansions in Paris.
Fragmented after the French Revolution with the creation of a Theater on the right and a passageway on the left, it regained all its glory from 1830 onward, becoming the property of the Duke of Orleans. The latter installs its own circle and receives all the great intellectuals and artists of the time such as Victor Hugo, Flaubert…
At the end of the 19th century, the Palais knew a new effervescence with the acquisition of Rodolphe Julian. He founded the first center of the Julian Painting Academy, which remained famous for the number and quality of the works that came out of it and the birth of some avant-garde painters.

Passionate since childhood by the first empire with nearly 2,000 rare objects from this period, today’s owner is one of the greatest collectors in the world of the Napoleonic era. He bought the premises in 2015 and endeavored to take the palais back to its former glory.
The 7 sumptuous salons host walls decorated with gold leaf and authentic moldings.
The tour aims to show the most important pieces of furniture and paintings as well as shedding light on the rarely seen objects gathered in the cabinet of curiosities.
The host’s main wish is to offer a truly special and intimate experience to the visitor and will allow to stroll the collections with a glass of special premium champagne!

Receptions and dinners can also be organized in the palais.