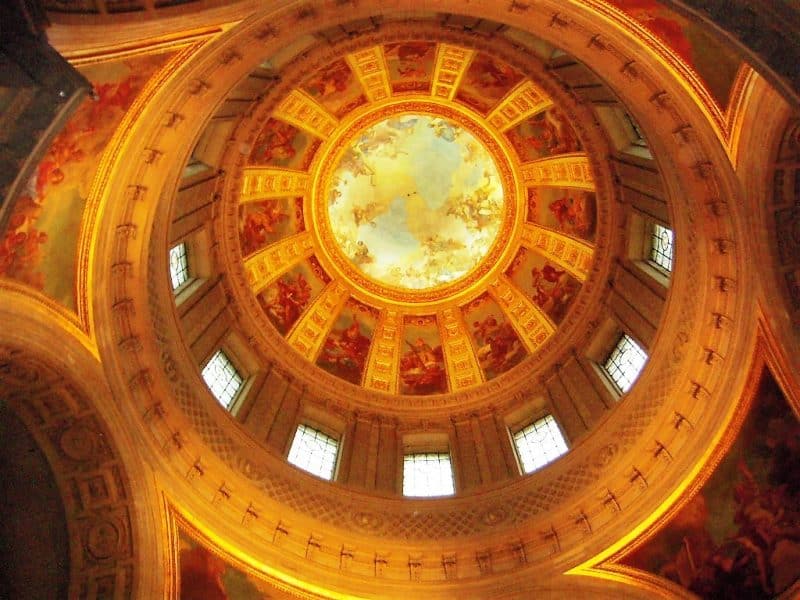 The Invalides – Museum of war

In 1670, there was nowhere to house disabled or destitute soldiers who fought for France. Louis the XIVth, sensitive to the plight of soldiers who served during his many campaigns, decided to build the Hotel Royal des Invalides.
Now assigned to the Ministry of Defence but also housing many organizations from other departments, the Invalides still retains its first hospital-hospice function for the severely disabled veterans of war.
Aside the visit of the museum of war and its many secrets, we will go over the political design of the king behind the institution and its influence in the urban landscape in Paris.

Explore the secrets of the Invalides – Museum of war

The huge complex of the Invalides – Museum of war, one of Paris’s most prestigious buildings, was built from 1671 to 1676 and completed by Hardouin-Mansart, one of the most famous architects of Versailles.
Its large courtyard houses sculptures and decorations windows both extraordinary and mysterious, and one of the world’s largest collections of guns through the ages. The huge statue of Napoleon, who was originally on top of the Vendome square column, has observed since 1911 many highs events that took place in the courtyard. Today, funerals of senior army members and tributes to French soldiers killed in conflicts around the world are happening here.

The Museum of war houses artifacts and documents of military history from the late Middle Ages. To be noticed is the hall of armors, some that belonged to several kings of France, and the incredible collection of firearms from the 16th to the 18th century.

The museum is best known for the rooms devoted to the First and Second World War. With visual and sound archives, striking and unique objects and documents, the visitor is taken from the 1870 defeat to the end of the Second World War and its consequences.

The tour will be an architectural and historical survey of the building and will, after a stroll in the halls of armors, the soldiers church and the main yard, focus on the two world wars. (other themes available upon request)

The walk will then continue with a visit to Napoleon’s tomb, located in the Church of the Dome, where the vast space dedicated to the Emperor is surrounded by tombs of famous marshals from the time of Louis XIV to the 20th century.