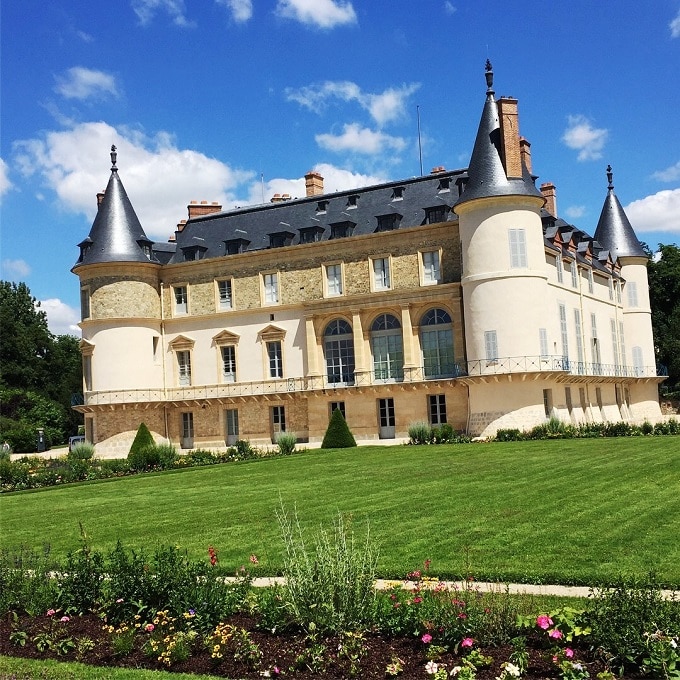 The tour will walk the streets of Rambouillet city to discover a first surprise site, before heading for the chateau. It displays beautiful 18th century rooms as well as Napoleon’s private apartments, including a unique bathroom.
The tour will also lead to the rarely seen Queen Marie Antoinette’s dairy, magnificently restored, before discovering the amazing shell cottage, also from the 18th century.
The stroll in the vast park will offer great panoramas over the castle, the various ponds and islands. Just off the park, an imposing monument is dedicated to American troops fallen for the Liberation of the city.
A short walk through the city centre will take us to the train station and back to Paris.

Categories: All the visits, Exclusive walks

Located just 40 minutes train away from Paris, Rambouillet is a charming small town with long history and some remarkable buildings.
The chateau is of course the place to see. It spans from Medieval to 20th century and saw the great French Renaissance king Francis 1st die in the premises. Most of the rooms decors remind the times of the Penthièvre family, one of the highest aristocratic families in 18th century France. The walls are covered with superb wooden panels and rocaille mirrors.
Napoleon went a lot to Rambouillet for private retreats and a few rooms will show furniture as well as, a superb bathroom, the only one to be seen in all of the Emperor’s houses.
The last rooms will show the final period of the Chateau, when during a whole century, French presidents used it as a private and official residence for meeting foreign guests. The first G7 was organized there in 1976 and the dining room still displays the table set for the occasion with menu and photos.
The tour will go on with the visit of the Queen’s dairy, located just off the park. King Louis 16 bought the chateau and had the beautiful dairy built to attract Queen Marie Antoinette to Rambouillet.
Back into the park, not far away, the superb and extraordinary shell cottage was built for the Duc de Penthièvre’s daughter-in-law. Rarely open, it’s amazing and show the period’s refinement and delicacy.
The stroll into the park will highlight not only the statues displayed, but also give a beautiful panorama of the chateau over the lake and the islands.
On the way back, we’ll stop at the moving memorial for the American soldiers during the Liberation of the Rambouillet, before walking to the train station through the city centre.