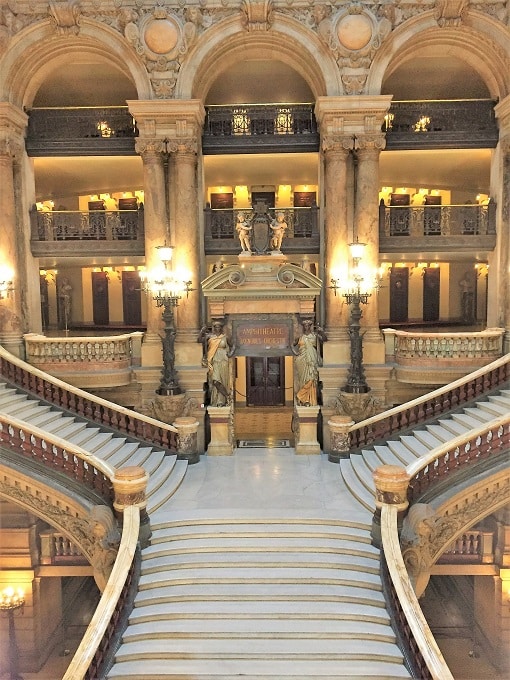 The Opera Garnier is undoubtedly one of the most dazzling monuments in Paris. The tour will go through the history and context of the construction with a first outdoor description.
The visit of the building will start with a vast space formerly used as a waiting room, before ascending the Great Staircase which leads to the auditorium as well as the various reception rooms and the famous grand foyer. It opens onto a balcony offering a stunning panorama stretching over to the Louvre. Some areas also exhibit costumes from famous plays, an archive gallery and temporary exhibitions.

Commissioned by Napoleon III as part of his major renovation of Paris, the Opéra Garnier remains Europe’s largest opera house, and a stunning example of Second Empire art and architecture. The site has inspired numerous novels over the years, the most famous of which is undoubtedly Gaston Leroux’s Phantom of the Opera – during your tour you’ll experience its powerful atmosphere, both dramatic and mysterious.

The tour starts at the subscriber’s rotunda, built as a direct access for the most frequent visitors, usually the elite of Paris. It leads to the bottom of the stairs, where the enigmatic Pythia’sculpture is located.
The sweeping staircase is one of the most impressive features of the Opera. The opulence of the architecture and design is overwhelming, as it incorporates blends of luxurious marble from Italy, Sweden and France, as well as precious stones, flanked by 30 marble columns ans illuminated with freat candelabras.

Charles Garnier pioneerd the use of Mosaics as a decorative method in France and embellished the vaults leading to the Grand Foyer. Impressively long, the guilded decor is outstanding as well as the two fireplaces and detailed fresco stretching across the ceiling.
Along with other exhibition rooms, archive galleries and secondary reception rooms, the tour will of course highlight the auditorium with its impressive stage and theater space. It can sit 2000 people and used to be biggest in the world. The 7 tons chandelier of pure bronze and crystal is world famous.
The ceiling, painted pompously in the 1870’s was covered in the 1960’s upon the command of Culture minister Malraux with a brand new work by Marc Chagall.