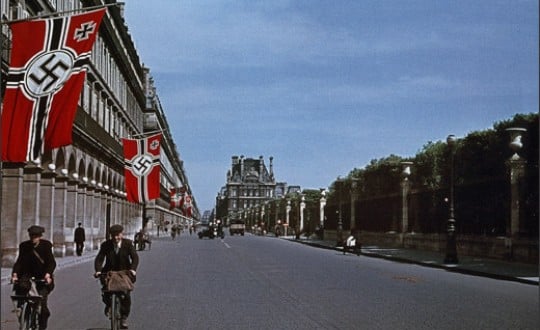 Amid disarray and chaos, the German army entered Paris on the 14th of June 1940. They will rule over Paris until the end of August 1944.
Between grand and small history, the tour takes you to see the main buildings where the German invaders settled and ruled for four long years. Lives, actions and fates of a few unknown people living through this period will also be told along the way, between Occupation, Resistance, Collaboration, Deportation and Liberation.

The tour will go over the Occupation of Paris 1940- 1944 and start right outside the exit of métro Cadet (line 7) in the heart of the third Jewish district of Paris.
After an outline of the historical and political circumstances that led to the outbreak of the Second World war, you will be given the facts explaining the French defeat, the conditions of the armistice and the dividing of the country.
Along the walk within the 9th district of Paris, different aspects of the Occupation of Paris and France will be given. The first one, with a stop outside a school and a synagogue nearby, concerning the situation of the Jews, from the new status appointed in July 1940 to the round ups and the deportations.
The tour will go on with other stories of unknown people along the way, either political opponents, deported Jews or simple citizens facing hard times day by day.
The second aspect of the tour will shed light on the economic Collaboration in many lines of business, luxury shops, banking and stock market.
With the Grands Boulevards and the Opera, the third thread of the tour will give a more cultural insight of the life during the four years of Occupation, between Nazi pomp with music and daily parades, cinémas, exhibitions and shows attracting many Parisians .
From the Opera through the grands Hôtels rue de Rivoli, you will the be shown the political and physical signs of the German presence in Paris. This will be the occasion to talk about the liberation of Paris in August 1944 and the events taking place in this area. Once again, incredible anecdotes will alternate with historical facts.

Eventually, we’ll walk past the buildings and places most directly connected to the German Occupation of Paris from 1940 to 1944, ending at Concorde square, where a series of amazing pictures will help you  understand better the way of life during this time. Finally, whilst sat on a comfortable bench overlooking the square, we will recount other stories about this troubled period, notably the works of arts stolen to the Jews and stored nearby, as well as the highlights of the Liberation of Paris.