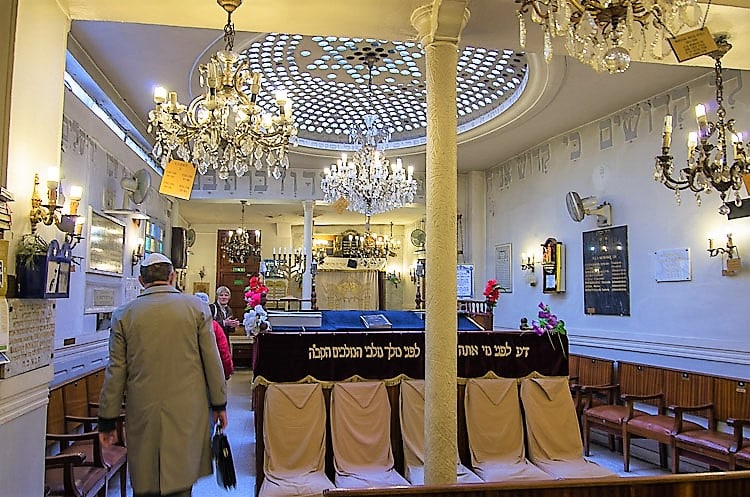 The historic Jewish quarter is found in the charming preserved district of the Marais especially around the rue des Rosiers. The walk brings to life the fascinating history of the Jewish population that has lived in France for more than 2000 years. In between persecutions and forced exiles, there have been periods that have consecrated the Jewish community as one of the most important and active in culture, politics, and business.
The tour presents places that often go unrecognized, from large synagogues to small hidden oratories, private mansions, typical streets and, of course, places of remembrance, followed by a reflection on the current status of the French Jewish community.

The Marais maintains a vibrant, although shrinking, Jewish presence. Known for its Sunday shopping, narrow cobble-stone streets, felafel and Middle Eastern restaurants and pastry shops, the Marais is a unique neighborhood that celebrates its diversity. One needs only to walk the streets of Rue des Rosier and Rue Pavée (famous as the first paved road in Paris) to experience the active Jewish community. Not to be missed is a sighting of the Hannukah Mobile traveling through the Quartier blaring holiday songs and inviting the community to celebrate in one of several active synagogues.
According to the Jewish Traveler Guide, “the Jewish community of France is the third largest in the world. Jewish history in France stretches back more than 2,000 years. Despite the shameful tragedies that have befallen the Jewish community, France has always returned to and solidified its commitment to its Jewish citizens. France shares an unshakable bond with them-and with people of all convictions- that has endured for generations, a bond that has made France a special and welcoming country.”

Gentrification and rising rents in the Marais have had a significant impact. During the past 2 years, a number of “mom and pop” Jewish grocery stores, religious shops and delicatessens have been converted to high-fashion boutiques, bars and restaurants. Although inevitable, it has resulted in local tension and changed the complexion of the neighborhood. Fortunately, Paris is a city that values its communities and refrains from drastic and unmitigated commercialism. In fact, several new, upscale Jewish restaurants have opened in the past year. Others have renovated, continuing to meet the needs of its traditional clientele while appealing to a new, curious and tourist population. Hence, the Jewish traditions continue to prosper and evolve.