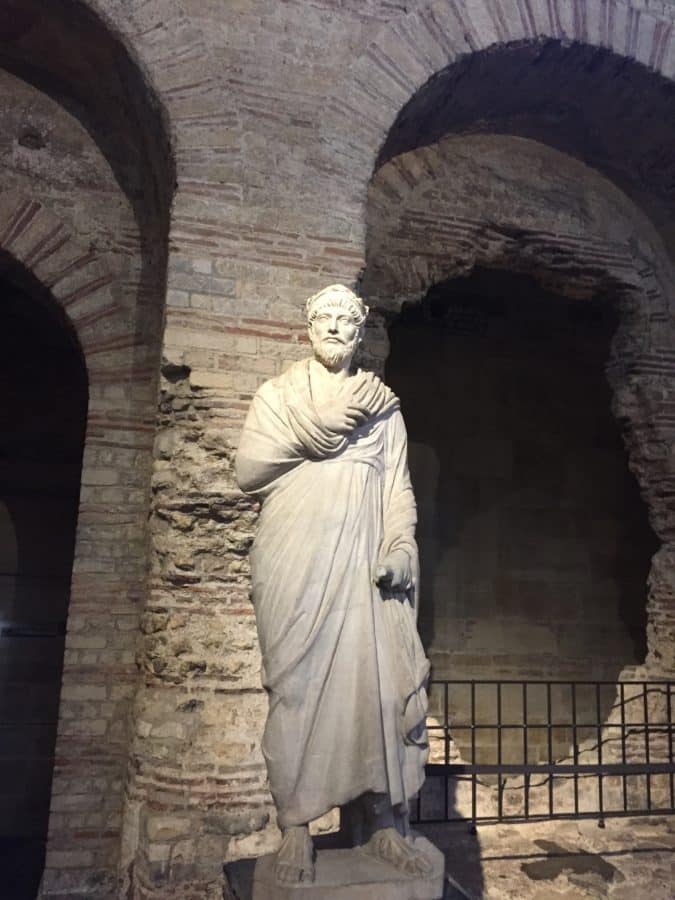 Paris is much older than one might at first think, at least twice as old as Notre Dame. Before the year 1000, there was, in this order: a Gallic settlement, a Roman city, and a Frankish royal capital—visited by people such as Julius Caesar, Julian the Apostate, and Clovis the King of the Franks. Many vestiges of this ancient history are buried today beneath the streets of visible, modern part of town. From the île de la Cité to the ramparts of the 12th arrondissment, we will pass through the Roman Forum and baths before completing the tour at the famous Arenes de Lutece (Lutetia’s arenas).

Paris is much older than the monuments of Louis XIV or the transformations of Haussmann may suggest. On the tracks of Ancient Paris, we’ll discover unsuspected elements of Parisian architecture.
First, thanks to the visit of the crypt of Notre Dame, the primal defensive wall built in the 3rd century Paris will be revealed. The Cité island is shown, as in the time of the Gallic presence, the only territory occupied by Parisians, protected by the river and the walls hastily built.
Impressive remains of houses, baths, streets, as well as the ancient port of Paris from Roman times are also visible.
After a short walk towards the south of the city, we will discover, in the basement of a magnificent fifteenth century manor now home to the National Museum of the Middle Ages, the remains of the biggest baths built in Paris.
Covering an area of 6000 m², they were so large they were used, despite their destruction as the first palace of the early franks kings in the fifth and sixth centuries. the main room, the frigidarium (cold water bath) is impressive. Several objects and statues, including the famous Boatmen’s pillar, are presented.
A little further away, heading still towards the south, other tracks can be observed, including several pieces from the twelfth century ramparts, part of the Roman forum, or a huge slab the Roman road linking Lutetia (Paris) to Rome.
At the end of the tour, we will see the oldest visible site built in place: the Lutece Arenas erected in the first century and now hidden behind nineteen century blocks. Where some are now playing football and others practice bolca, Gladiators, sacrificed christians and wild beast were put on show on the sand at the center of the arena. Vivid traces can still be seen to picture these moments.