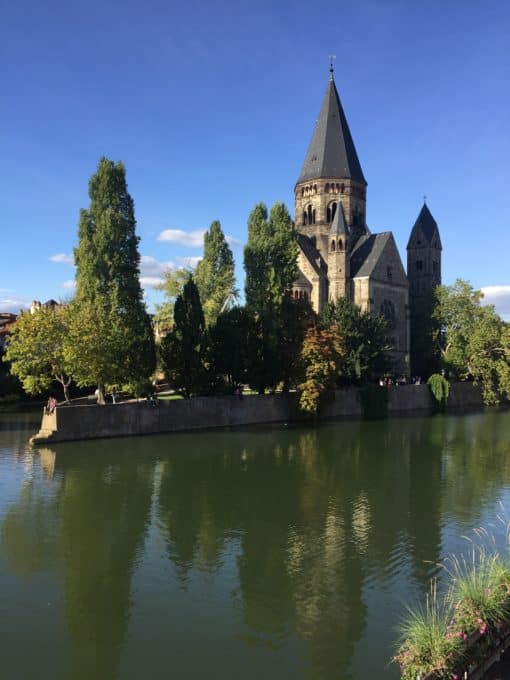 The capital of (German) Lorraine has a lot to offer! From Pompidou brand new modern art centre to the city’s history museum, where rare and unusual medieval buildings will be presented. The stroll through the city will show the river banks, but also towers and walls, reminding the great military role as well as the Imperial quarter, dating the German domination up to 1918. Surprising and unusual houses are also on the way around the medieval district surrounding the beautiful Cathedral (with windows by Chagall), to more traditional French style streets.

Practical informations:
• Meeting point: to be confirmed
• Duration: around 10 hours
• Train and walking tour
• From 90€ to 250€ per person (min: 2 people / max: 20)
• Pompidou centre private visit on top if less than 7 people
• Transportation and all sites tickets included.

This tour will give the opportunity to discover the capital of (German) Lorraine. Although now in France, the city had for long been in the middle of fierce fighting between many countries.
After an 1hr20 train ride, the tour will start with a guided visit of the brand new modern art Pompidou Centre (on top if less than 7 people), followed by a stroll through the Imperial quarter as well as the very special and typical 19th century architecture avenues.
After a lunch on your own and a break around one of Metz most colorful and beautiful square, the tour will go on with a stroll through the old town, then see the beautiful cathedral (with windows painted by Chagall), before admiring a unique site in Europe: the massive medieval creneled grain storage rooms, set in the city’s impressive history museum. The walk back to the station will highlight the beautiful river Moselle banks and leisure harbor as well as the many fortified ancient towers, reminding the constant military role of the city, Europe’s biggest stronghold in 1900.
In the heart of the citadel, the impressive governor’s palace watches over many different military buildings. One of them, now an art centre, used to be a chapel built from an antique 4th century Roman basilica.
The train station is the other famous city landmark, designed by the German Emperor himself, symbolizing executive, military as well as religious powers.