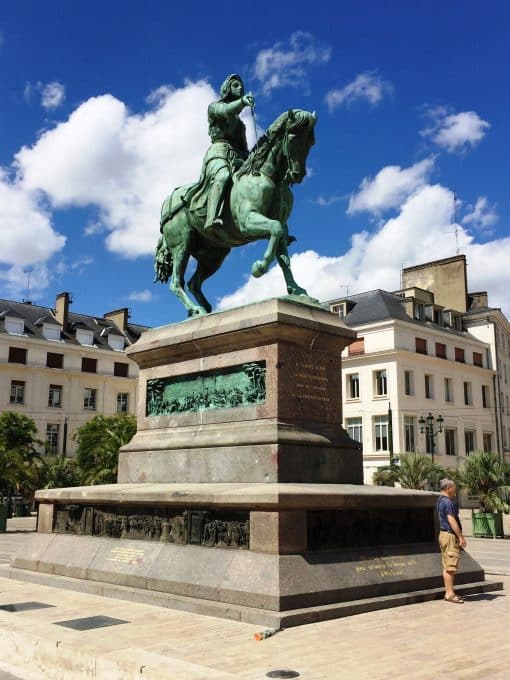 A day in Orléans

Just an hour away from Paris by train, Orleans lies quietly on the Loire river. If half the city centre was destroyed during the last war, large parts still show distinctive medieval and Renaissance buildings, including beautifully renovated hotels particuliers, now turned into museums.
The tour will also show the Cathedral, the Loire river banks and other interesting and lesser known elements.
The story of the local glory, Joan of Arc will be highlighted in the house she slept in when liberating Orléans.

A day in Orléans

The tour around Orléans city centre will show many different wonders both known and well hidden.
Starting with a beautiful garden next to the train station, the walk will visit the vast Renaissance cathedral, unmistakable symbol of the city.
Very close by is a sumptuous 16th century mansion, long used as the city hall. Now used for weddings only, it has been fitted with Renaissance decors and furniture. King Francis II died there.
More “hôtels particuliers” and hidden gardens are along the way to the museum dedicated to all the Jewish children rounded up in Paris during the last war and sent to internment camps around Orleans before going to the Death camps in Eastern Europe.
After lunch, the walk will stop at Joan of Arc‘s house. Rebuilt after the war, it houses a research centre for the world famous liberator of Orleans. A short film will highlight her forever remembered role during the Hundred years war.
The rest of the day will show how vast parts of the city still contain beautifully restored half timbered medieval or Renaissance houses.
One of the city’s most lively streets leads to more discoveries, including the pedestrian Loire river banks.